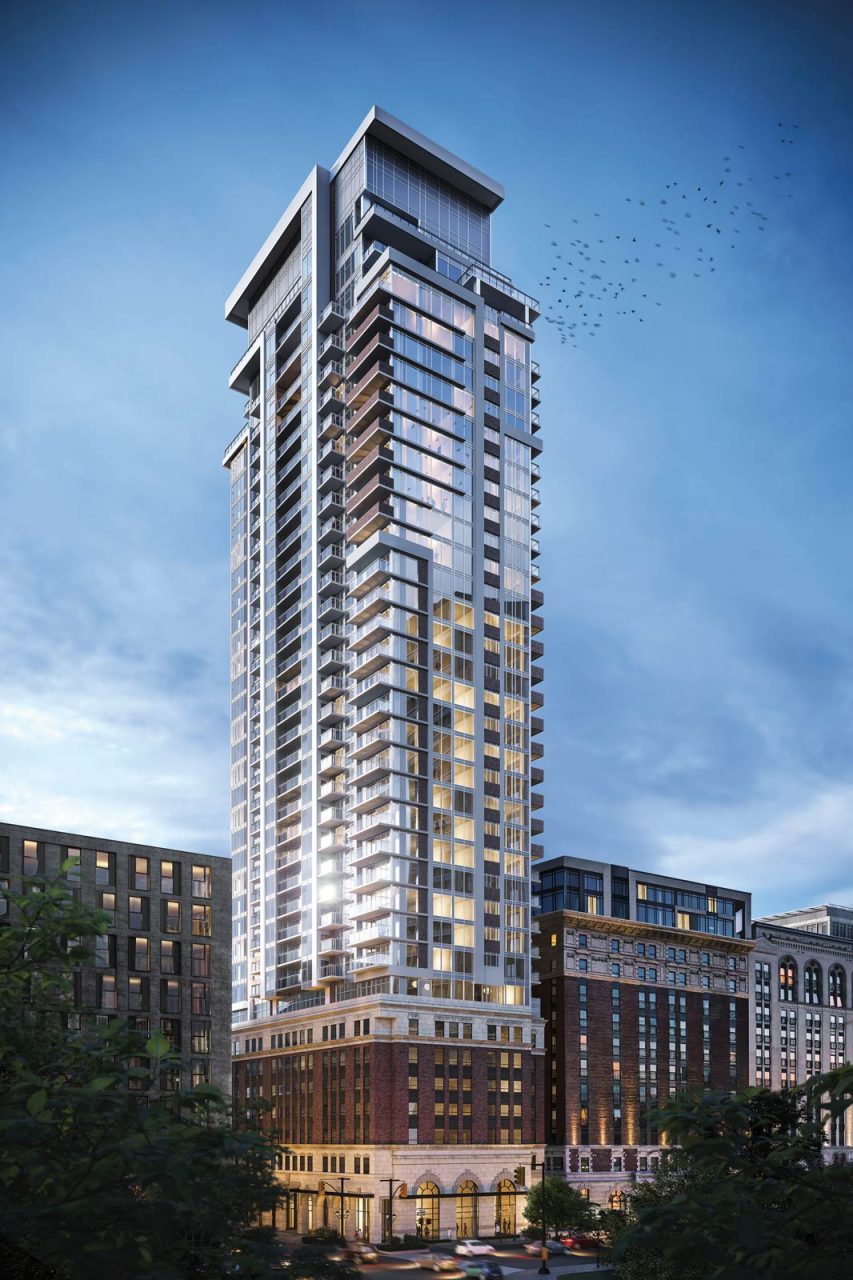 Developers of Royal Connaught Square are moving on to the third-phase addition: the addition of a glassy, 36-storey tower of private units to Hamilton’s skyline that would make it the second tallest building in the downtown core.

The tower, called The Moderne, will sit along King Street and Catharine Street, and is the first of three new residential buildings planned for the site. A website allowing people to register for the units —  one bedroom, one-bedroom plus den and two-bedroom suites — says the tower will be “arising soon.”

Online listings for the previous builds show per-unit sale prices range from $450,000 to more than $1 million each.

As for Phase 3, “renovating and revitalizing the historic Royal Connaught was always about ushering in a new era for downtown Hamilton,” said Rudi Spallacci, president of the Spallacci Group, which partnered with Valery Homes in 2014 on the project.

“We know that this has been a tough year for the city, but the changes that have occurred in our downtown over the last five years have been dramatic and are here to stay.”

A public relations spokesperson for the project said building permits are still required, but sales are expected to begin this summer. Construction will begin after that, and wrap up in 2024 or 2025.

Taller than the escarpment

The only downtown building taller than the tower would be Landmark Place at 100 Main St. E., which has 43 storeys.

Approval of the development came before the 2017 downtown secondary plan, which doesn’t allow highrises downtown to be taller than the Niagara escarpment. Under the plan, if a building is at the lowest elevation possible, the limit would be about 30 stories.

The city confirmed planning permissions and zoning for the development, which has a conditional site plan approval, were carried forward.

Burlington-based KNYMH is the architect behind the tower, as well as the first two phases that turned the historic hotel into condominiums. In a release, the developers say the tower will be made up of glass and metals that give it an contemporary urban look.

The podium at street level will include “brick cladding, intricate accents, stones and keystones.”

Built in 1916, the Royal Connaught Hotel was named after the Duke of Connaught, who was then governor general of Canada. It had 244 bedrooms and a banquet hall that could hold 1,500 people.

By the 1930s, the bottom floors were turned into offices and shops. The hotel changed hands several times before it went into receivership and closed in 2008.

The developers turned it into condos in spring 2017, people began moving into the first two phases at 112 King Street E. and 118 King Street E.

Toronto-based esQape will design the tower’s interior. The release says this will include marble and brass accents, black and gold light fixtures and velvet upholstery. The suites will also have a private foyer and nine-foot ceilings. The eighth floor will be a fireside lounge, co-working spaces, a meeting room, a movie theatre, a scotch-tasting bar and other amenities. The developer is calling it “The Social Club.”