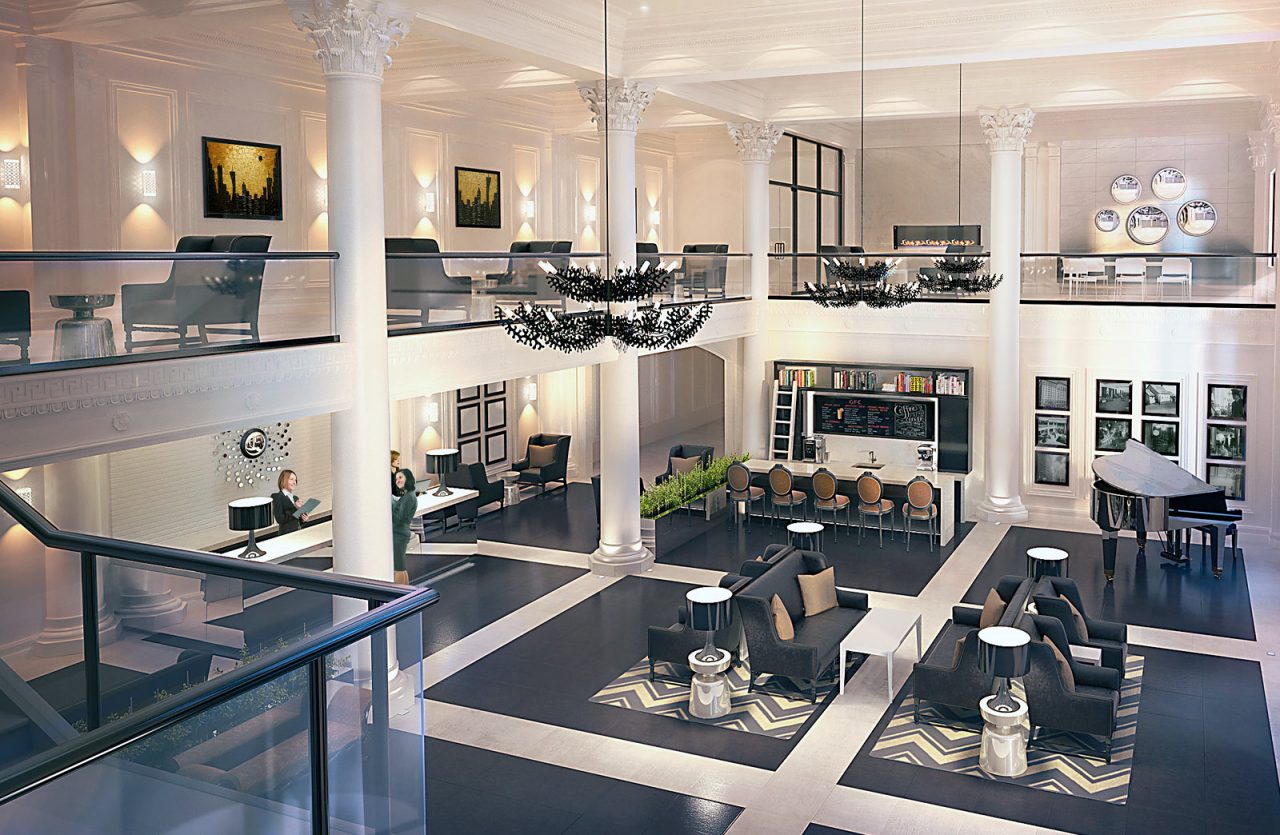 The lights are back on at the Connaught, with more than 100 units occupied.

Rudi Spallacci Jr. walked into the Royal Connaught Hotel and saw nothing but desolation.

It was 2008, and he was working on a film shoot for the Total Recall remake. Dystopian cinema came easy in the husk of a building that was once downtown Hamilton’s crown jewel.

Those glory days were long gone.

“It was completely in shambles. Everything was destroyed,” Spallacci said.

Smashed glass littered the floor from broken bottles. The once grand chandeliers in the main lobby hung by threads, inches from the floor. The massive staircase that was the room’s centrepiece was completely unstable, and unsafe to scale.

In many ways, The Connaught was an avatar for downtown Hamilton itself, which had been hollowed out by a faltering steel industry and a mass exodus to the suburbs.

But things change. After years of promises and false starts, The Royal Connaught is once again bustling with life — not as a hotel, but as a condo tower. People have been moving in since last spring and 120 units are now occupied. Save for a couple of penthouse suites, the first phase of the project has sold out.

Though the move-ins came with little fanfare, they represent a long dreamed-of revival of a Hamilton icon, and are emblematic of a rejuvenated downtown core.

The Connaught first opened in 1916, named after the then-governor general of Canada, The Duke of Connaught. It quickly became a Hamilton destination — if you were someone special, you stayed in one of the Connaught’s 244 bedrooms with their marble-floored bathrooms, and partied in its 1,500-person capacity banquet hall.

In the 1930s, the hotel changed hands, and a 200-room extension was added, while the bottom floors were turned into offices and shops, adjacent to Gore Park. More renovations and sales continued through the years, but the good times continued for decades.

Then the 90s hit, and everything changed. The hotel was sold multiple times, and saw many financial struggles. The Connaught finally closed in 2008 after going into receivership.

Plans to renovate and reuse the space popped up every couple of years, promising to bring the Connaught back to life. 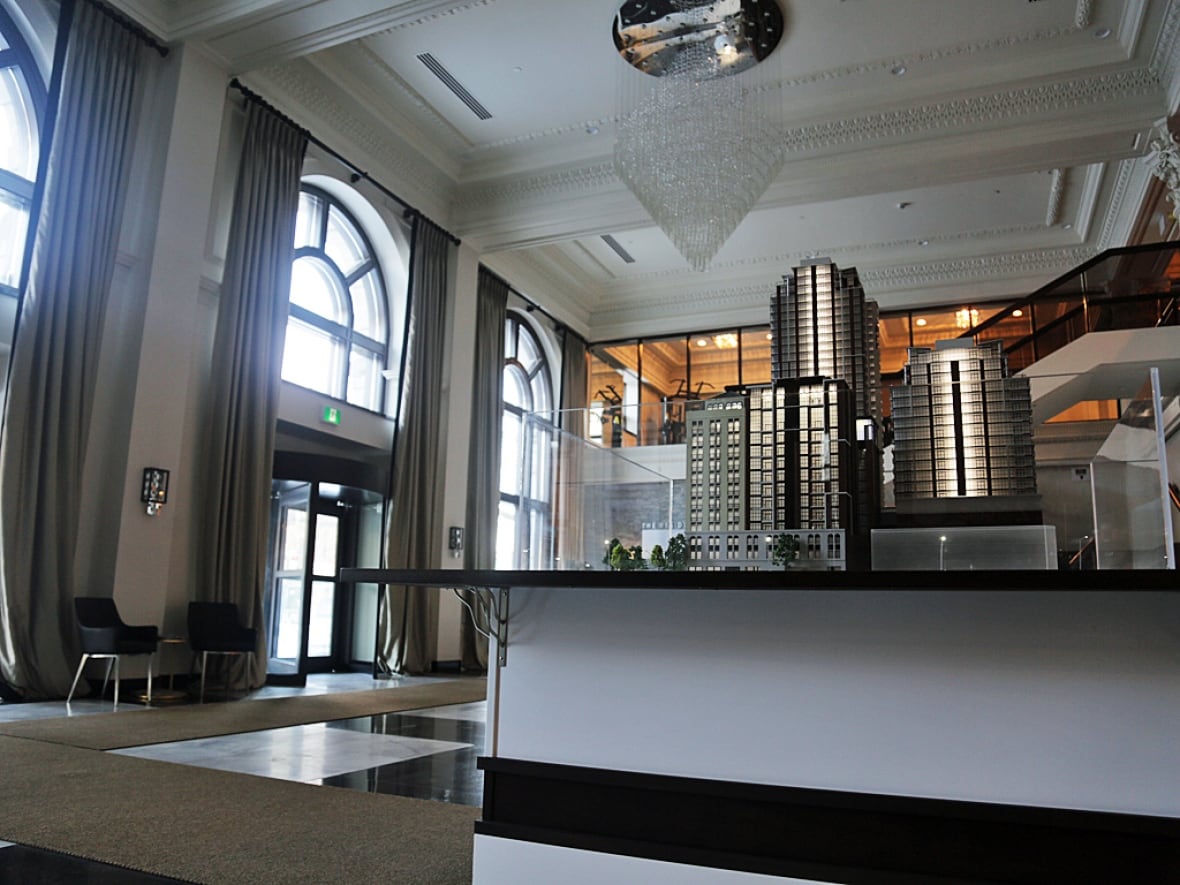 “Every time I saw those articles, you could sense the excitement from people,” Spallacci said. “This space is important to this city and its people.”

But nothing took hold — until 2014, when Spallacci Group and Valery Homes teamed up to restore and renovate the hotel. Now, there are only a few penthouse suites available in phase one of the project. Construction on phase two started in June of last year.

Mario Spina and Marisa Majerovich moved in in July. They have a family history with the building, like many in Hamilton. Spina’s parents stayed at the Connaught after their wedding in 1972, before heading to Italy on their honeymoon.

The pair had some reservations about moving downtown at first. Spina is a Hamilton lifer, and calls the core “his hood” from childhood. He remembers James Street and the Eaton Centre from when it was its most vibrant.

But as the owner of NaRoma Pizza Bar, he wanted to get closer to the core. His fiancée works at Nordstrom in Toronto, and says friends are blown away when they visit, seeing the 100-year-old floors and original crown mouldings of the lobby.

The couple is even planning to shoot their wedding photos in the lobby of their own home. With that kind of downstairs, why go anywhere else?

‘I’ve seen such a change’

Kathy Tally moved into her unit in mid-May, and before long, had purchased a second one as an investment to rent out. With a love of architecture, she was drawn to the immense history of the building.

Now, she works two blocks from home, walks everywhere, and even organizes “condo hopping” evenings with friends in the building.

She says she felt zero trepidation about moving downtown, as someone who has been working in the area for 30 years.

“I’ve seen such a change in the last five years — and the Connaught is such a big part of that. It’s reinvigorating the place as somewhere you want to be.”

That the area is being called “somewhere you want to be” is music to Ward 2 Coun. Jason Farr’s ears.

“Folks want to live in and be part of something that’s historic,” Farr said. “You can combine heritage with new urban form and be successful with it.

“It’s impossible now to argue with downtown’s revitalization. I’m just happy to be a part of it.”

The area has changed rapidly. High-end restaurants dot James Street North, King William and surrounding areas. Cranes reach towards the sky on nearby condo projects, as foot traffic keeps inching upward. The monthly Art Crawl has become so popular that the massive crowds it draws have almost become a problem.

With all this happening, the Connaught is about to bring even more people downtown. When all five phases of the project are complete (slated for seven or eight years time) there will be 700 suites housed in one of Hamilton’s architectural icons.

Spallacci says that what they really want to build is a sense of community.

“There’s a sense of ownership for everything in this city,” he said. “I like that. I like that people care.

“Seeing this complete was breathtaking. I never imagined it could be done.”